Firms must brace for investment challenges 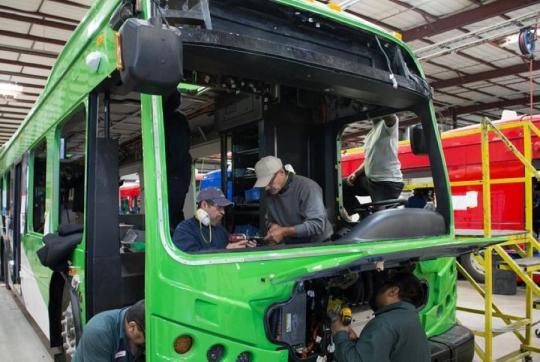 Workers in the BYD factory in Lancaster, the United States, on March 23, 2017. (Photo/Xinhua)

Companies from China must be ready for more challenges as the United States and some other countries are tightening the rules on overseas investment since the novel coronavirus outbreak, said Tu Guangshao, former president of China Investment Corp and a member of the Chinese People's Political Consultative Conference National Committee, in an interview with China Daily in Beijing on Wednesday.

"If the U.S. further restricts Chinese investment, U.S. stakeholders of a China-U.S. bilateral industrial cooperation fund will also be affected," said Tu, as the co-investment model has bound interests of enterprises from the two sides.

The China-U.S. Industrial Cooperation Fund, mentioned by Tu, was jointly set up by the CIC and Goldman Sachs in 2017, aimed at deepening bilateral trade and investment cooperation. It planned to invest $5 billion in U.S. companies that have or can develop a material business connection to China in the manufacturing, industrial, consumer, and healthcare sectors, according to its 2017 financial report.

"The operation of the fund has been smooth till now," Tu said. Goldman Sachs has a share of more than 50 percent. The fund as a whole has extended its scale to $3 billion compared with the initial $1.5 billion. The first joint investment project was in a U.S. radiator manufacturing company, which has been successful, he said.

The bilateral cooperation fund could be a model for the overseas expansion of Chinese enterprises amid the COVID-19 effect and tightening investment scrutiny. Chinese investors in the fund, like the CIC, can also help foreign companies to better explore the Chinese market and import products, in addition to financial investment, as they better understand the domestic industrial chain layout, said the former CIC president.

The CIC's other bilateral industrial cooperation funds, including the Sino-Japanese, China-France and China-UK funds, are making steady progress, he said.

Tu called for the setting up of a national overseas investment security system to provide certain services and protect Chinese companies' rights and interests. China's global investment layout should be optimized, to reserve and increase the value of national wealth. "Chinese companies should focus on risk control and improve corporate governance."

The CIC's Executive Vice-President Zhao Haiying said last week that the company's unaudited financial results showed overseas investments generated returns of about 17 percent in 2019 as global stocks rallied. It showed a loss in 2018 when equities tumbled after a record 17.6 percent gain in 2017.

Zhao told media on the sidelines of the annual session of the 13th National People's Congress that the CIC will pay close attention to the changes in Sino-U.S. ties, the market situation, and make prudent investment decisions based on its own investment philosophy and risk tolerance.

The CIC has diversified investment portfolios in the U.S. financial markets, and its targets include public shares, bonds, hedge funds, private equity, real estate and infrastructure.

"Trade friction between China and the U.S., and the rise of investment protectionism, have not only damaged investor confidence, but also brought greater uncertainty to the global economy and financial markets," said Zhao.