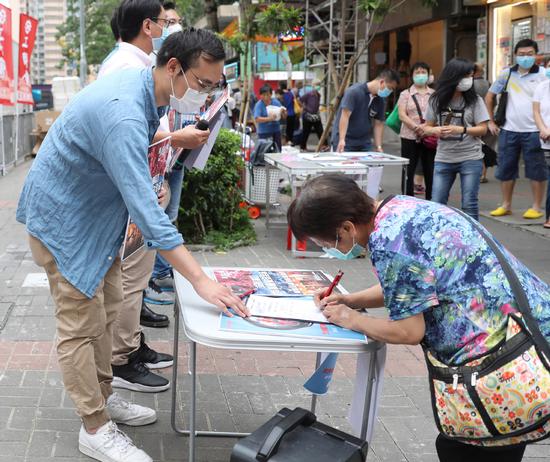 A Hong Kong resident signs her name on Friday to show her support for the national security legislation for the special administrative region. (Photo/Xinhua)

The central government made a "prudent decision", based on the current situation, in establishing and improving a legal framework and enforcement mechanism to safeguard national security in the Hong Kong Special Administrative Region from a State level, Vice-Premier Han Zheng said on Saturday.

Han, who is also a member of the Standing Committee of the Political Bureau of the Communist Party of China Central Committee, made the remark during a panel discussion with political advisers from Hong Kong and Macao attending the third session of the 13th National Committee of the Chinese People's Political Consultative Conference.

Han said that punishing the small minority of "Hong Kong independence" and radical separatist forces according to the law and firmly opposing external interference in Hong Kong affairs was in order to uphold the lawful rights and interests of the majority of Hong Kong people.

The moves also help safeguard the long-lasting peace, stability and prosperity of Hong Kong, he added.

Saying that the practice of "one country, two systems" in Hong Kong and Macao has achieved great success since they returned to China, Han told the political advisers that the central government, as always, has a strong resolve and confidence in upholding the principle of "one country, two systems", and it has the greatest concern for the prosperity and stability of the special administrative regions and the well-being of Hong Kong and Macao compatriots.

Han's remarks came as a draft decision to add a national security law to Annex III of the Basic Law of Hong Kong has been submitted for deliberation to the third session of the 13th National People's Congress.

These legal gaps were highlighted by a series of violent protests since June that quickly turned into an anti-government movement.

Article 18 of the Basic Law stipulates that a national law listed in the annex shall be applied by way of promulgation or local legislation.

Also on Saturday, the Chinese embassy in Canada rebutted a joint statement issued by the foreign ministers of Canada, Australia and the United Kingdom in response to the new security law for Hong Kong, saying that their remarks constitute gross interference in Hong Kong affairs as well as China's internal affairs.

The legislation for Hong Kong to safeguard national security is purely China's internal affair, the embassy said in a statement on its website.